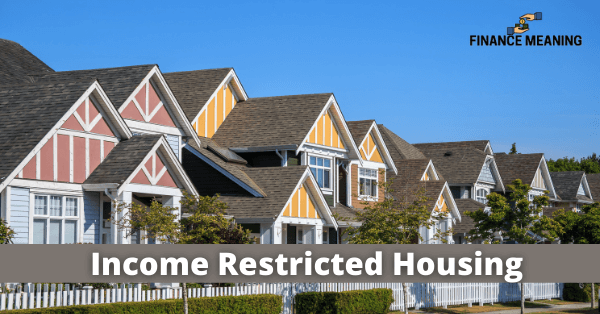 What is Income Restricted Housing and How Bad is it?

Income restricted housing is the go-to solution for low-income households looking for affordable housing. The U.S. Department of Housing and Urban Development established the plan along to subsidize rental costs. Here’s more about the subject.

What is Meant by Income Restricted Housing Apartments?

These are privately-owned apartments that qualify for subsidized or reduced low-income rentals. As such, qualifying applicants raise a specific percentage of rent based on the area’s median income.

Initially, the apartments were owned by the government. However, they were later devolved to allow states, cities, and private developers to operate them.  The owners usually receive a subsidy payment from the federal tax credit or state.

The program dates back to the early 1930s. The federal department of housing (now called the HUD) wanted to alleviate the housing hardships caused by the Great Depression. It initiated an Act of Congress in 1934 to make homeownership affordable for the larger public.

The Act proposed establishing mortgage insurance programs to allow applicants to make low down payments. Later in 1937, the Act was amended to provide public housing to low-income people too.

At the time, the nation’s housing stock was deplorable, lacking in basic things like hot running water. And with more people migrating from urban areas to suburbs, it was the perfect time for the government to improve urban infrastructure.

To further address the housing problem for low-income people, Congress elevated housing to the cabinet-level creating HUD. Despite government incentives, the cost of operating public housing had eclipsed the revenues earned from residents.

As a result, the HUD decided to provide subsidies to public housing agencies (PHA) to compensate for the difference between the cost of operation and rent received. This initiative birthed the income-based housing program through the Brooke Amendment of 1969.

It stated that low-income people would raise 25% of the rent, and the federal government subsidized the rest. The government later increased the percentage to 30%. However, low-income housing still experienced many problems like cases of prejudice against people of color. Also, once the contracts forged by private owners and HUD expired or owners decided to pay subsidized mortgages early, the affordable units were no longer available.

Recommended Read | THINGS TO KNOW ABOUT MORTGAGE CREDIT CERTIFICATE IN 2021

Beyond structural changes in federal housing programs, no significant investments have been made to help people with low income more than 40 years later.

Studies also show federal investment in housing didn’t increase in proportion to the growing need for housing in urban towns. What’s more, the government channeled most housing investments to homeownership, not rental housing for low-income households.

A1990 Act called the Cranston-Gonzalez National Affordable Housing Act obligated various jurisdictions to prioritize housing for their residents. This meant local and state governments planned and executed housing programs, not the federal government. It was this Act that led to the development of income restricted apartments. Beyond the state’s contribution, Congress created additional housing programs to leverage private investment. This initiative led to the development of the Low Income Housing Tax Credit that spawned the income-based housing program.

It meant landlords providing housing under this program received tax credits. While both housing programs provide affordable housing to low-income households, they have three notable differences:

The local and state government, as well as non-profit agencies, fund the income restricted housing program. It is part of the U.S. Department of Housing and Urban Development’s affordable housing initiative.

Income restricted apartments charge rent based on a percentage of the area’s median income while factoring in the current market rates. This means rent rates can’t exceed the market value for a specific area.

The government compensates for the difference between the market value and quoted rental rate. On the other hand, income-based housing programs don’t use the market rate to determine the rental rate. Instead, the rate is capped at 30% of the tenant’s adjusted gross income, with the government subsidizing the remainder.

Tenants who qualify to stay in income restricted apartments must provide proof of income for apartment. Typically, the annual household income should be 60% less than the area’s median income. Note, income differs by state. For example, the median income of a low-income household in New York is higher than that of a rural community in the Midwest.

Since median incomes vary depending on the tenant’s state, the income requirements for this program are also different. The HUD uses four factors to determine an applicant’s eligibility:

Incomes vary by household and a resident’s metro area. As such, the HUD calculates the median income for metro areas around the country every year. It then determines the maximum income based on the family that has:

Most cities limit income restricted apartments to people with very low income levels giving preference to those in the ‘extremely low income’ category.

Qualifying applicants must meet HUD’s definition of family. According to the HUD, a family is an individual or group of people:

What to Do When the New Card Arrives

Tenants eligible for either housing programs are required to apply for a card. Since the demand for low-cost housing often exceeds supply, you’ll be placed on a waitlist. Once your application is approved and you have received the card you should start looking for an apartment.

Note, the card has a limit on the number of bedrooms an apartment should have. Also, it doesn’t show the amount of rent subsidized. As such, it’s essential to talk to your housing authority to find out the range provided. What’s more, you’re responsible for the security deposit. The website outlines the income guidelines for eligible applicants in your metro area.

Get in touch with your local public housing authority to determine the amount of rent based on the apartment size you desire. The officer also provides a list of available rentals near you.

If looking for a government-owned apartment or privately owned properties, apply through PHA. While applicants must pass a criminal background check, offenses disqualifying them vary by location. Also, private owners have stricter rules.

You must prove your household income meets the low, very low, or extremely low HUD eligibility criteria. Also, adults must provide their birth certificates or other documents to prove their age and photo IDs.

After applying, you’ll be placed on low income apartments no waiting list. Your flexibility about apartment size and whether you are applying for an income-based or income restricted apartment determines the waiting period.

What Does Income-restricted Mean When Renting an Apartment?

This is subsidized housing meaning rental rates are lower than the average market rate. They are primarily designed for low-income households.

What is the Difference Between Income-restricted and Income-based?

The main difference between the programs lies in ownership and how rental rates are calculated. Private landlords own and operate income-restricted apartments. They calculate a standard rent rate based on a percentage of an area’s median income.
By contrast, the government runs income-based housing programs as they are a form of public housing. Rent rate based on the resident’s income. Tenants are required to raise 30% of the gross income while the government pays for the balance.

What Does it Mean to be Income-restricted?

It means the tenant qualifies for low-income housing if they meet specific income standards.

Is Income-restricted Before or After Taxes? The income limit is based on a household’s gross income, the total income, before subtracting tax and other deductions.

Since income-restricted apartments are privately owned, the landlords may decide to perform a credit check. However, credit checks are not a basis for disqualifying applicants.